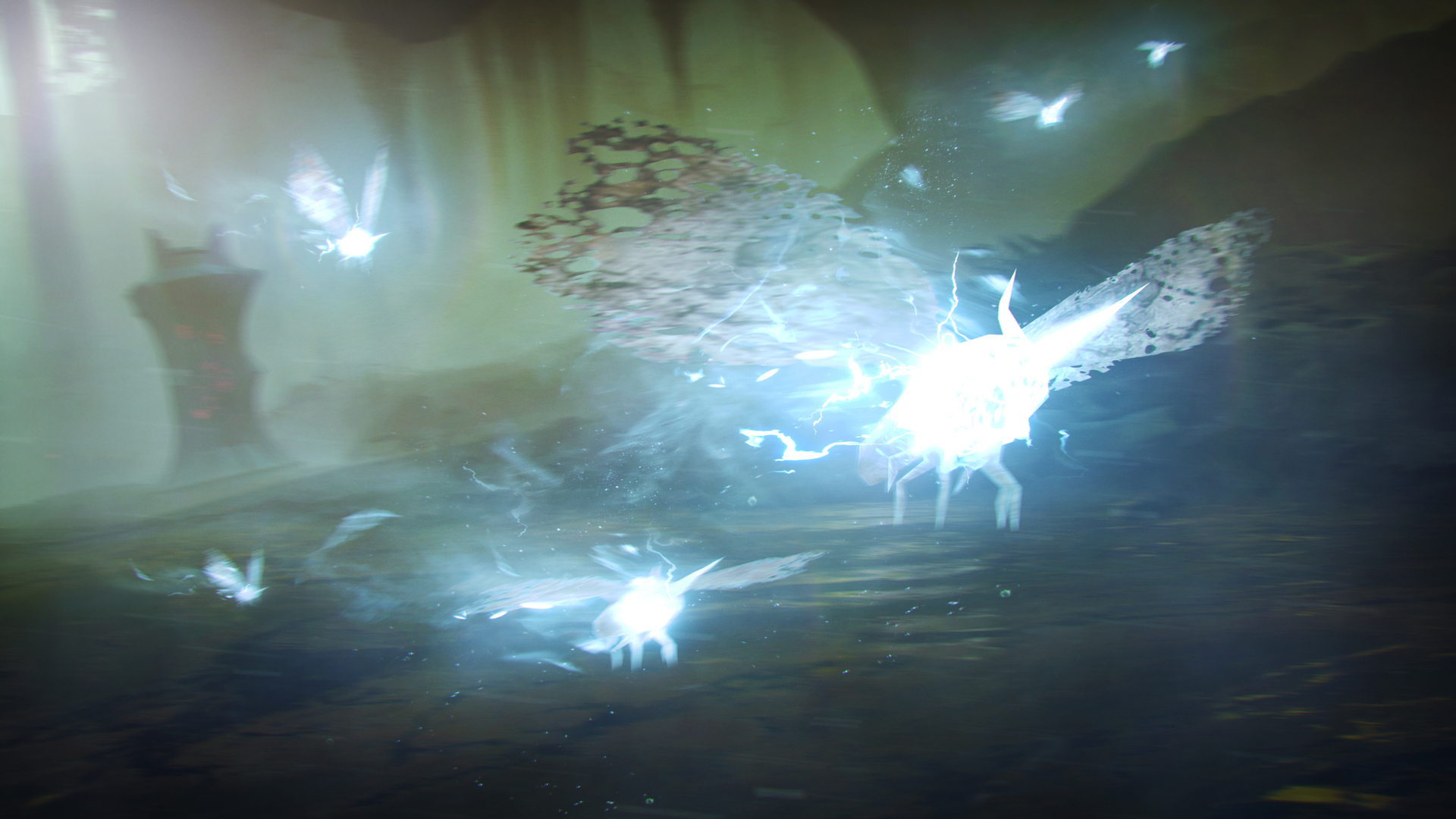 Find all the Lucent Moths in the Throne World in Destiny 2 for the Lepidopterist Triumph.

Destiny 2: The Witch Queen features Lucent Moths for players to collect. Finding and unlocking all of them will reward the Triumph, Lepidopterist. If you’re starting at the launch of the DLC, you will need to come back each week to find the new moth locations.

There are several Lucent Moths to find in the Throne World in Destiny 2. At the start of The Witch Queen, these were unlocked on a weekly basis. If you’re finding these several weeks (or months) after the expansion releases, you should be able to go around collecting them all.

You can find hints of the Lucent Moths locations in the small cave beside Fynch. This is also where you place the moths after you find them.

The first Lucent Moth is near the Extraction Lost Sector in the Quagmire area. A Wizard will spawn that you must defeat to free the moth from its barrier.

This moth is deep in the Apothecary, to the left of the stairs that lead up into the main building. To reach this area, start at Fynch and go toward the Florescent Canal (but not into it), and stick to the right-hand side to find platforms you must jump over to go into the Alluring Curtain – this is also where you can farm Funnelweb.

When you reach Alluring Curtain, use the Deepsight to the left to reveal platforms that lead up and over the tower and hanging plates. Follow the main path along until you reach the Apothecary region. Go around the curving walkway to the opposite side to the little bunker. Use the Deepsight to reveal five runes on the bunker that you must shoot to reveal the moth.

Another Lucent Moth is in the Alluring Curtain location. This area is to the right of the Quagmire and is accessed via some platforms you must jump between. If you go into the Florescent Canal you’ve gone too far.

In the Alluring Curtain, use the Deepsight to reveal platforms that lead over to another area along the right-hand side. Continue until you find a named Wizard. Defeat this Wizard and it will drop the moth.

Temple of the Cunning

This Lucent Moth is found deep underground in the Temple of the Cunning. This is accessed via the Quagmire, in the cave system to the left of the Extraction Lost Sector.

Follow the cave system down, shooting the glowing spores on the walls as you go. You will reach an open room with Scorn in it and yellow portal up the back. Go through the portal to reach the Temple of the Wrathful.

In this new area, stick to the left-hand side and follow the path down. You will enter the Temple of the Cunning location where there will be a Hive chandelier hanging over a center platform. The moth is on a little pillar in front of it.

Finding all of the Lucent Moths in Destiny 2 is going to take a bit of time, especially if you’re collecting them at the start of the season. However, finding them all will get you the Lepidopterist Triumph, which is needed for the Gumshoe Title. Check out the Shacknews Destiny 2 Guide for even more useful information on collectibles and weapons.