AMD’s strong performance in the growing enterprise market has also placed it at the top of research firm IC Insight’s list of top ten semiconductor growth companies for 2021. IC Insights believes that AMD is set to grow its revenue by a remarkable 65% this year, which, if true, would result in the Santa Clara company bringing in $16 billion in revenue in its fiscal year 2021. This would top off strong performance during the fiscal year 2020, which saw the chip designer annually grow its revenue by 45% to rake in $9.8 billion.

Through the current fiscal year’s first, second and third quarters, AMD has cumulatively earned $11.5 billion in revenue. Should IC Insight’s prediction bear fruit, then in the ongoing quarter, AMD will have brought in $4.5 billion through its net sales. Compared to its fourth-quarter 2020 results, this marks 28% annual and 4% sequential growth.

IC Insights believes that this growth is fuelled by solid data center sales, where AMD has emerged as a “leading supplier” in a “booming market.” Other companies mentioned by the research firm include NVIDIA Corporation, set for 54% growth during 2021, alongside China’s premium foundry, the Semiconductor Manufacturing International Corporation (SMIC), with a projected growth of 39%. 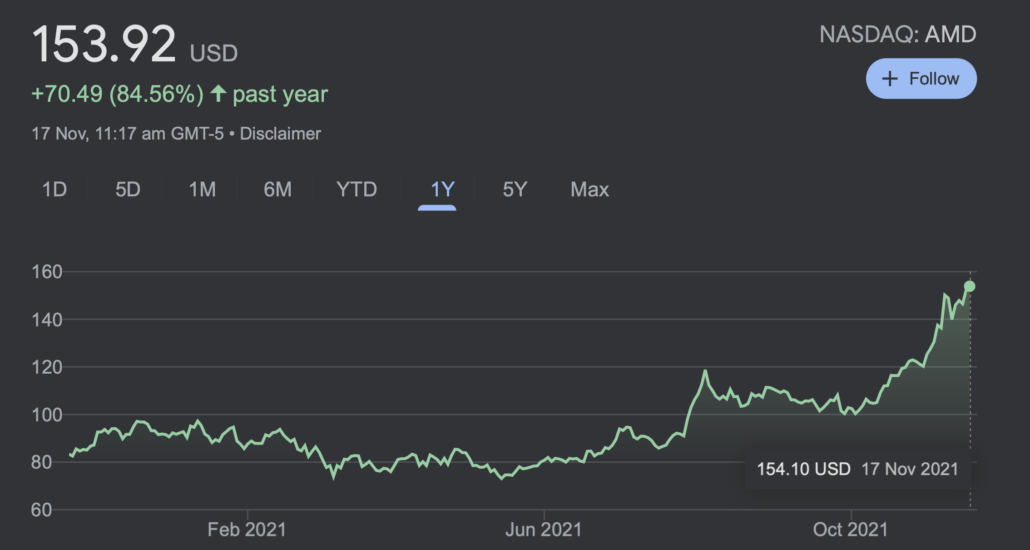 AMD’s shares have appreciated by 84% over the past year as it delivers regular quarterly revenue growth.

In a separate report, Taiwanese publication DigiTimes believes that AMD and Qualcomm are interested in 3nm chips supplied by Korean manufacturer Samsung Foundry. DigiTimes’s sources believe that TSMC’s relationship with Apple has dissatisfied the two companies, any one of who might become Samsung’s first 3nm customers.

Despite rumors, TSMC’s management believes that the company will kick off production of its 3nm manufacturing process in the first half of next year. This process commonly referred to as a node in the semiconductor industry, will be TSMC’s latest chip technology once it enters production. The Taiwanese fab is generally believed to give Apple preference over procuring semiconductors manufactured using the latest technologies due to the close relationship between the pair. This has allowed Apple to ship its smartphones and notebooks with the latest processors.

Finally, I’ll talk about the N3 and N3E status. Our N3 technology will use FinFET transistor structure to deliver the best technology maturity, performance and cost for our customers. Our N3 technology development is on track. We have developed complete platform support for both HPC and smartphone applications. N3 risk production is scheduled in 2021, and production will start in second half of 2022. We continue to see a high level of customer engagement at N3 and expect more new tapeouts for N3 for the first year as compared with N5.

We also introduced N3E as an extension of our N3 family. N3E will feature improved manufacturing process window with better performance, power and yield. Volume production of N3E is scheduled for 1 year after N3.

Our 3-nanometer technology will be the most advanced foundry technology in both PPA and transistor technology when it is introduced. With our technology leadership and strong customer demand, we are confident that N3 family will be another long and last — will be a large and long-lasting node for TSMC.

Samsung’s 3nm process uses the gate-all-around (GAAFET) transistor, and products built through it are expected to make their way into the hands of first customers in the first half of 2022. TSMC will start 3nm production in the second half of next year and enter volume production for the second generation 3nm process in 2023.