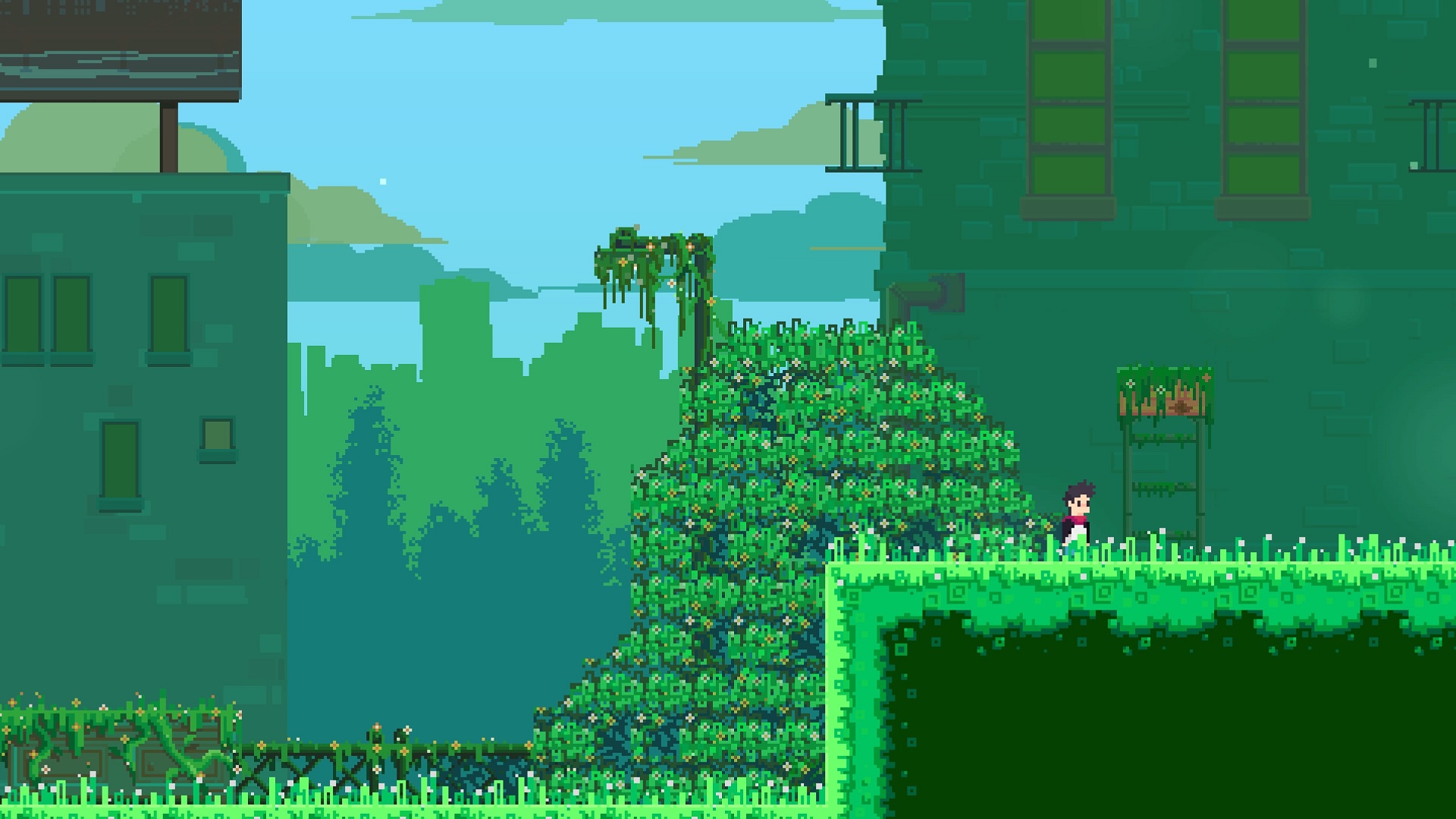 What Lies in the Multiverse review: Pretty and puzzling

What Lies in the Multiverse is a gorgeous romp through shifting worlds with puzzles that'll bring both joy and frustration.

The concept of What Lies in the Multiverse has a familiar feel to it, yet as you progress through its beautiful world and challenging assortment of puzzles, you'll find that the game manages to inject something surprisingly new and fresh into the mix. The game is described as a “dimension-shifting, comedic adventure about worlds turned inside out through the powers of one gifted young boy and the misguided lessons of an eccentric scientist” which brings to mind tales like Back to the Future or Rick and Morty. And it’s true, you’ll find this dynamic between the two main characters in What Lies in the Multiverse, but you’ll also find something else buried deep within the story that gradually reveals itself as you progress.

It’s a darker element that feels starkly different from the comedy sprinkled throughout the game. Despite this, What Lies in the Multiverse manages to stick the landing. With the game’s story, you’ll find that the buildup is worth the payoff, even if it takes a while to get there.

The mechanic of switching between worlds is brilliant, though the game doesn’t solely rely on this clever mechanic from start to finish. The game switches things up with a nice assortment of puzzles, most of which are approachable enough to support the game’s intent of giving you little to no hints or clues. The intent is made even clearer with jokes included in the game about its lack of direction or instructions. Particularly from your “guide” Everett who takes off and leaves your character – a small child – alone so he can go off and do things like gamble at the casino.

Fortunately, for the most part, a little trial and error is all it takes to stumble upon a solution to the game's myriad of puzzles. I’d say it’s about 90/10 on puzzles I loved versus puzzles I disliked. The ones I disliked though, I really, truly, strongly disliked.

As for why, some puzzles feel punishing simply for the sake of being punishing with no real rhyme or reason for it. The harder puzzles also end up feeling out of place in comparison to the puzzles both preceding and following them. This created some pacing issues for me that pulled me out of the game and its story. One example of this is a platforming puzzle where you need the absolute, correct, specific jump timing to get past it. In the case of puzzles like these, it’s less a challenge of figuring out the solution and more a challenge of executing a certain string of moves exactly as the developers want you to.

If you have hands that cooperate, you should be able to nail it, but if you have hands like mine that get frozen and stiff to the point where you have to wear gloves while gaming (a little secret you get to learn about me today), you’re in for one hell of a frustrating time.

I imagine some people approaching What Lies in the Multiverse will turn to guides to figure out solutions to puzzles like these, but even with guides, may still struggle with some of them like the aforementioned platforming puzzle. Not all of the puzzles I disliked were due to them feeling unreasonably punishing, but also because you can actually break some of them.

There was one puzzle I thought I needed a specific box for. After pushing it where I thought it needed to go, I realized I’d accidentally blocked the gate that I needed to open in order to progress forward. Even though I was able to get the key to that gate without issue, I couldn’t get past the box I’d inadvertently blocked the gate with. As a result, I had to reset and try again.

Thankfully when I did that, resetting didn't remove the key from my inventory so with the box reset back to its original position, I was able to just walk over to the gate and open it.

I wish I could say that was the only time that happened to me in the game, but it wasn’t. I somehow managed to glitch past one of the puzzles and skip it entirely. I can’t explain to you how that happened because I honestly have no idea.

I was working on the puzzle, and then all of a sudden, I was in the next area talking to Everett. You can imagine my surprise at this, although I will say, I was secretly delighted that I no longer had to work on the puzzle I’d previously been chipping away at. If the game is going to give me a free pass, intentional or not, who am I to complain?

Visually, the game is stunning with each location sporting an aesthetically pleasing color palette. The game uses visual queues to the fullest to make it abundantly clear the difference between worlds. Whether you’re shifting from a modern city to one that’s overgrown with plant life, or switching from a peaceful walk near a river to a mad dash through an inhospitable wasteland that you can’t breathe in, the game never fails to keep your attention.

You can uncover secrets by switching between worlds, and in general, I found it fun to just switch back and forth between them at random so I could see what the area looks like in that alternate universe. The game doesn’t always allow you to freely switch between worlds, with some puzzles challenging you to make due without the mechanic, or to use it in new ways, but when the mechanic is available, it’s a blast to play around with.

The game relies on text for character dialogue, but shakes things up by changing the color and pace and intensity of the words to make it even clearer the tone of voice the character is speaking in. One highlight of this is the easily angered Nash, a member of Zenith who, alongside leader Leo and crew, are working to put a stop to Everett's universe-breaking shenanigans. Controller vibration is also used, like when Nash stomps his foot.

There are a few sections of dialogue where you can’t control the pace the characters are speaking at, which is a great way to emphasize them being nervous or excited, but can also cause you to miss a lot of what that character is saying depending on how fast you read.

Still, the game does a lot to give each character their own distinct personality and tone of voice, so even though you can’t hear what that voice sounds like, it’s easy to picture in your mind. This does a lot to enhance the humor of the game, with the cutscenes being huge, humorous highlights in What Lies in the Multiverse.

As for the music encountered in What Lies in the Multiverse, the tracks included provide a nice, mood-setting backdrop to keep you company while you're solving puzzles. The music isn't overly present, and often fades into the background, which feels like an intentional choice to avoid distracting you.

What Lies in the Multiverse is wild when it comes to the game’s story. Obviously I don’t want to spoil any of the big reveals that tie to the dark twist lying in wait beneath the story’s lighthearted surface, so I’ll keep things focused on the comedy element.

The comedy of the game is solid, no doubt about it. It’s not the funniest game I’ve ever played, but it got a few good laughs out of me. Even when I wasn’t laughing, I was enjoying the “don’t give a F” attitude the game gives off.

Everett is a standout character when it comes to the way the game delivers its humor, with your character having to constantly chase after him like Roland chases the Man in Black in Stephen King’s The Dark Tower. The chaotic energy between Everett and everyone else in the game is so much fun to feel caught in the middle of, and serves as a great form of incentive for you to solve puzzles and push forward. If you’re looking to play What Lies in the Multiverse for its story, characters, and comedy, you certainly won’t be disappointed.

And as a side note, I really appreciated the game's references to other forms of media, including what appears to be a reference to Snowpiercer. That one actually made me laugh out loud.

What Lies in the Multiverse doesn’t overstay its welcome, and it's one you can pick up and put down at your leisure. That said, once you start getting attached to the game’s characters, is one you won’t want to put down. Well, unless you’re stuck on a puzzle that’s starting to get on your last nerves.

As a puzzle game, What Lies in the Multiverse is pretty darn decent, but where it truly shines is in everything else that surrounds the game's puzzles. The characters are ones you want to talk to and spend time with, the worlds are all distinct and fun to explore, there are hidden secrets for you to find, and some truly fun moments when it comes to the game’s story.

There are also heartfelt, vulnerable moments in the story that add nuance to the slapstick. These moments make you grow even more attached to the characters, and remind you that sometimes there are unexpected consequences when you start messing with things outside of your full control.

Overall, I enjoyed What Lies in the Multiverse and feel like most people will as well. Just don’t say I didn’t warn you about some of the game’s punishing puzzles, especially the timing-based platforming ones. If you have popsicle fingers like I do, I wish you the best of luck working your way through the game, because you’re going to need it.

This review is based on the PS5 version of the game. The product key was provided by the publisher for review consideration. What Lies in the Multiverse will be available on March 4 for PS4, PS5, Xbox One, Xbox Series X|S, Nintendo Switch, and PC.